Will the Mid-Term Election Results Cause Trump to Change His Trade Policies? Watch the G20 Meeting in Buenos Aires for Signs of a Positive Change

Sino-American Trade War — Will the G20 Bi-Lateral Meeting Change Its Course?
Pressures on the global economy and financial markets continue to intensify from the Sino-American trade war. In a recent speech at an Asian economic conference, Vice President Pence said, “the United States will not change course until China changes its ways.” Perhaps we will see an effort to reduce these trade tensions at the end of November when Presidents Trump and Xi will meet at the G20 summit in Buenos Aires. Their separate bi-lateral discussions will likely act as a fork in the road. Either the outcome leads to a framework for further negotiations or, if not successful, to additional retaliatory trade actions. In our August commentary, we observed — “this leaves investors trying to determine what motivates just two men — the Presidents of the United States and China — not an easy task.”

Update On Current and Proposed Tariffs
During this summer, the United States imposed 25% tariffs on $50 billion of industrially significant equipment imported from China. Then, at the end of September, the United States placed 10% tariffs on an additional $200 billion of Chinese imports. Overall, the tariffs affect about 50% of Chinese imports. Moreover, in January, the U.S. government threatens to further increase those tariffs to 25% and consider possibly slapping 25% tariffs on the remaining $265 billion of Chinese imports. As much as possible, China responded tit-for-tat to these U.S. actions. However, their much smaller level of U.S. imports – $130 billion in 2017 – limits their equivalent response to tariffs on around $60 billion of U.S. imports. While the headlines focus on these tariffs, structural problems for U.S. companies operating in China remain the core of the trade war. They do not lend themselves to a quick fix.

The Great Lakes States Democratic Blue Wall Reinvigorated by the Mid-Terms — Will That Change the President’s Policies?
In the 2016 presidential election, President Trump broke through the so-called Democratic blue wall in a number of Great Lakes states including Wisconsin, Michigan, Ohio as well as Pennsylvania. In the recent mid-term elections, Wisconsin, Michigan, and Pennsylvania returned to the Democratic fold based on statewide results. Potentially adding further difficulty to the President’s re-election outlook, China-focused their tariffs on imports from states that supported Mr. Trump — including the mid-west farm states (see Figure 1). Therefore, recent mid-term election results might cause the President to reevaluate his approach to the trade war to reduce potential negative pressures on the U.S. economy. This possibility could shift the balance of influence within the administration from trade hawks, represented by Peter Navarro, to doves, represented by Treasury Secretary Mnuchin and Larry Kudlow —the Director of the U.S. National Economic Council. 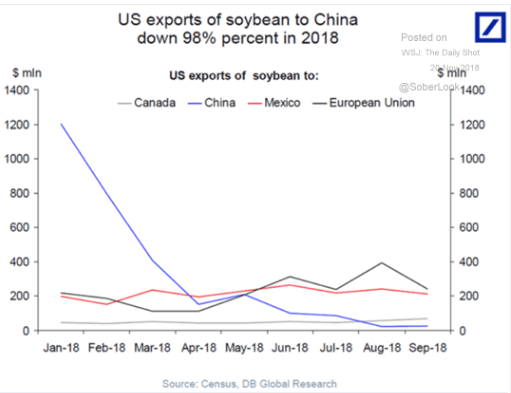 The G20 — Potential Outcomes — the Good and the Bad
Trade negotiation teams from both countries at the G20 will attempt to work out a tentative agreement before the two leaders meet. Because of the political and economic pressures, the two presidents more than likely will sign off on a framework for negotiations. As part of that agreement, the United States could hold off scheduled January tariff increases. President Xi might respond by pushing back the “made in China 2025” goal for world-class technology capabilities to a later date. This may not make for a practical difference for China but would satisfy the administration’s headline requirements.

On the other hand, a lack of a framework agreement could lead to further retaliatory measures. For example, the administration might then increase tariffs on all Chinese imports to 25% not just those scheduled for January. In that case, some project earnings growth for U.S. companies would be flattish in 2019 compared to current estimates of 6-10% growth from various forecasters. The Chinese might respond by increasing their structural impediments for U.S. companies to operate in China.

Investment Conclusions
While hard to measure its financial market impact, the trade war remains at the top of investor concerns. As evidence, a recent Global Fund Manager Survey conducted by Merrill Lynch showed that fund managers consider the trade war the biggest “tail risk” facing investors (see Figure 2). If the bi-lateral talks produce a framework for negotiations, then equity markets should respond positively in what some might call relief rallies. This would prove to be the case for equity markets in both the U.S. and China as well as more broadly for global markets. If, however, no clear indication of progress comes out of these meetings, then the uncertainty caused by the trade wars will continue to cloud the outlook for investors.

Figure 2
Global Fund Manager Survey
What Do You Consider the Biggest “Tail Risk”?