Trade War – the Tariffs
It took some time for investors to finally shake off their complacency and show their discomfort with the reality of higher tariffs. The mid-June headlines indicating the U.S. would impose $50 billion of tariffs On Chinese exports helped end their lethargy. In fact, on July 1st only $34 billion will be implemented
and principally on agricultural and industrial machinery. The remainder of the increase—partially on semi-conductors—will be delayed and subject to future hearings. China responded with similar tariff amounts primarily On U.S. agricultural products. The recent trend of soybean futures (Figure 1) shows traders anticipated that move. 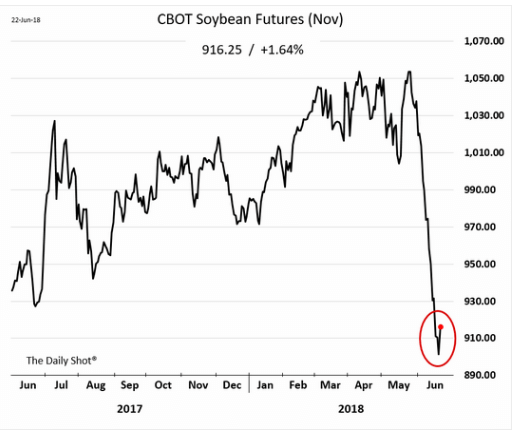 More Tariffs and China’s Possible Response
After the mid-June announcement, the administration further threatened to impose higher tariffs on roughly $450 billion of the $506 billion imported from China in 2017. At the same time, China imported just $130 billion of U.S. goods. So obviously, the administration senses that China cannot respond
proportionately to its tariff threats. However, China could respond by making it more difficult for American companies doing business in China. Other tactics China could adopt include weakening the yuan or, less likely, threatening to reduce its holdings of U.S. government debt. The recent decline
of the yuan suggests an adjustment already occurred (Figure 2). 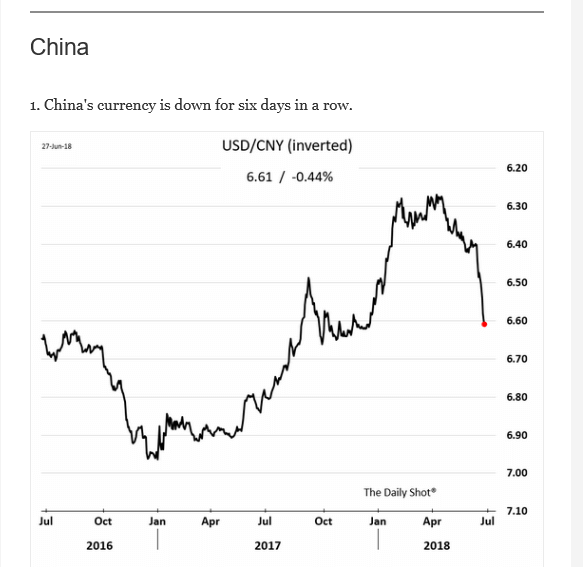 The Real U.S. Concerns — Not Trade — China’s Technological and Military Ascent
The administration’s underlying concerns center on China’s rapid advancement of its military and technological strategies and goals. The administration threatened tariffs in attempt to negotiate a limit on China’s access to U.S. corporate intellectual property, particularly technology. The administration also used the same threat to attempt to make it easier for U.S. corporations to operate in China without ultimately fully sharing their proprietary operating and manufacturing systems. At this point, not surprisingly, China shows little willingness to respond to these broadcasted threats.

A More Immediate Threat — NAFTA Negotiations
While investors focus on trade issues with China, an immediate threat may come from the NAFTA negotiations. The key date comes up at the end of this week. On July 1, Mexico holds its presidential elections and polls call for the election of the populist candidate Andres Manuel Lopez Obrador known by his acronym AMLO. Assuming NAFTA negotiations do not succeed by June 30, his election would undoubtedly put off further any possible NAFTA restructuring agreement. With that, easy
Congressional fast track approval will be delayed. Ironically, the election of AMLO pits two populist presidents on opposite sides of these negotiations – AMLO and Trump. With the upcoming
mid-term Congressional elections, the White Housemight live up to its past threats and withdraw from NATFA.

Comparing Tariff Levels — Where Does China Stand?
How do tariffs compare among the various major trading countries? Recently the Cato Institute published a commentary that provided such comparisons (figure 3.)Analyzing the impact of the tariff structure can prove to be difficult as many countries negotiate bi-lateral agreements to moderate or eliminate some of these tariffs. Clearly, China shows up in the table with higher tariff levels. Along with that, China’s intellectual property “abuse”, and foreign business operating constraints shows the administration’s argument for change contains a degree of merit. 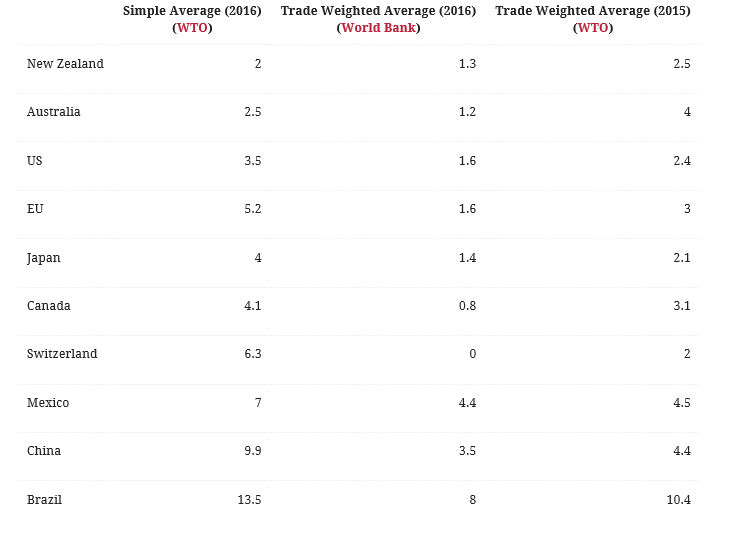 Source: Cato Institute – Simon Lester
Industries Impacted By a Potential Trade War
The most global of U.S. industries include tech, energy, industrials, and materials. For U.S. global companies, approximately one-third of their sales comes from non-U.S. operations. In comparison, only 21% of revenues generated by Russell 2000 index companies comes from outside the U.S. that
difference, in part, may explain the recent outperformance of that index, when compared to the S&P 500 index (see figure 4).
Figure 4 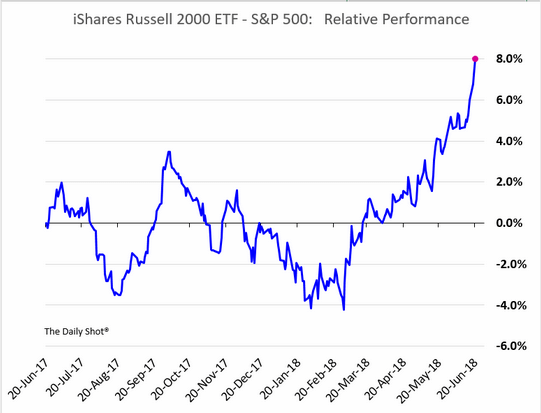 Source: The Daily Shot
Implementing higher tariffs would likely change global trade flows. If this occurs, transportation and shipping industries will certainly feel that shift. Higher tariffs will also effect the flow of semi-finished products as they move from country to country in the complex global manufacturing systems. Those companies providing out-sourced manufacturing for U.S. companies could suffer if potential higher tariffs affect the countries where they operate. Their flexibility to shift production will determine the level of that hurt. Overall, these uncertainties will likely contribute to businesses holding off on some capital
and business expansion plans.

Relating National Security Issues and German Auto Tariffs
As in the case of China, there may also be an underlying issue festering below the increased auto tariff headlines with Germany. In our opinion, that underlying issue may be German defense spending which also reflects on its military readiness. More on that shortly. In 2014, NATO members pledged to spend 2% of GDP On defense by 2024. The following table shows only Estonia, theU.K., and, yes, Greece hit that target last year (see figure 6).
Figure 6 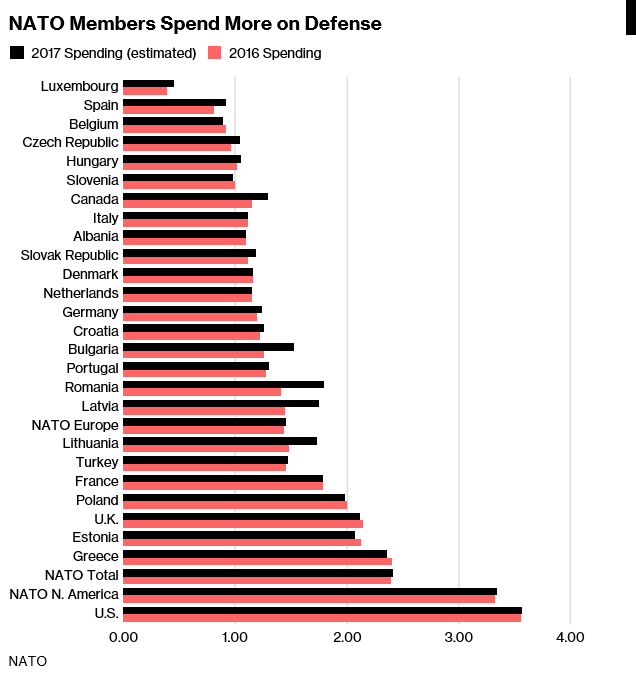 The U.S. expresses particular criticism of Germany’s relatively small proportional contribution considering the size of its economy. In addition, according to a NATO expert at the Atlantic council in Washington, “the readiness of the German military is abysmal.” A recent article from Stripes.com supports that quote. This article points out that none of Germany’s submarines can be considered operational, that only four of its 128 Eurofighter jets stand combat ready, and it lists other important areas of similar concern.

Therefore, when the administration cites auto tariffs on German cars as a security issue it may be broader than the initial reading may suggest. Once again, the administration seems to be using higher tariffs to achieve goals beyond what tariffs directly affect. Unfortunately, it may simply lead to trade wars without resolving the indirect issues.

Investment Conclusions
Despite the trade war issues, we expect ultimately that world leaders will face up to the need to solve some of the legitimate concerns of this administration. Perhaps, weaker financial markets and stress on their economies will push through an ultimate agreement. Alternatively, with the president’s known
focus on stock market performance, the evident investor displeasure with his trade fight may move him to a more conciliatory position. At the end, it takes two to tango. So far, no one showed up at this dance.

With that expectation, we remain of the opinion that the Fed’s normalization policies will prove the most important force effecting financial markets this year and next. If that proves the case, our view remains that Fed normalization efforts will cap stock multiples. Therefore, companies that can demonstrate
above average earnings growth will benefit. If these stocks suffer from the trade whirlpool, investors should use that opportunity to initiate or add to growth stock positions.