The first week of October started with sobering economic news in the form of surveys from the Institute for Supply Management (ISM). At weekend, unlike the surveys, a hard data employment report came in from the Bureau of Labor Statistics (BLS) showing solid employment gains indicating the economy continues to grow—albeit at a moderating pace.

Early in the week, the ISM’s Manufacturing PMI index September survey fell further into contraction and below forecasts (see Figure 1). In addition, many of its component indices fell deeper into contraction. One important trade indicator, the ISM Manufacturing Export Orders index fell to the survey’s lowest level since 2009 (see Figure 2). Both the trade war as well as the strong dollar likely influenced that decline. 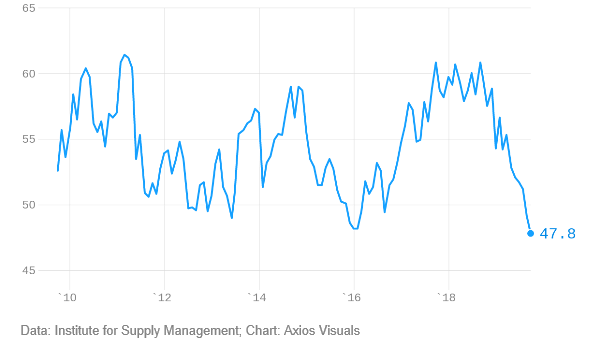 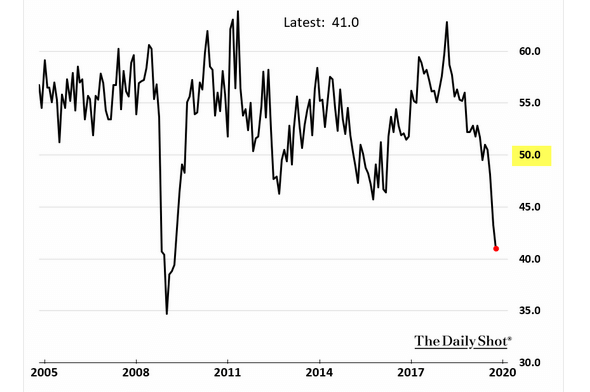 Await Hard Date to Confirm Surveys — But Not Investors

Economists will await hard data to confirm the downward direction of both the overall survey and its various components. However, investors showed little willingness to await the hard data. As a result, markets sold off sharply early in the week in reaction to the results of these surveys.

Later in the week, the ISM non-manufacturing survey index declined to 52.6% from 56.4% in August well below forecasts. Unlike the manufacturing index, however, the service index remained at an expansionary level. For perspective, manufacturing contributes about 11% to GDP compared to over 75% for services. According to the ISM, survey participants express concern mostly “about tariffs, labor resources, and the direction of the economy.” Most components of the index still showed growth but at a slower rate of change. This broad component growth provides a stark contrast to the manufacturing index as nearly all its components declined.

With the disappointing surveys, the futures markets showed increased probabilities the Fed would cut the funds rate at its October meeting (see Figure 3). At its early December meeting, besides considering a further rate cut, the Fed will provide updated guidance for 2020. Next year, the Federal Open Markets Committee (FOMC) will likely try to make any additional rate cuts early in the year to avoid involving itself in presidential politics. 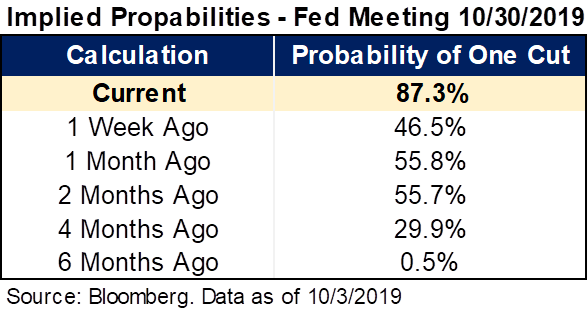 The BLS reported a solid jobs report with 136,000 nonfarm payroll positions added last month. Important for consumer psychology, the unemployment rate declined to 3.5% - the lowest level since December 1969 (see Figure 4). In our view, this decade’s low unemployment rate should contribute to continuing a relative positive level of consumer optimism.

Representing nearly 70% of GDP, consumers remain key to the U.S. economic outlook. Holding up the globe like Atlas, U.S. consumers also represent one of the few signs of economic strength worldwide. A near-term test of consumer strength will occur between now and the end of the holiday season. The National Retail Federation (NRF) looks for holiday sales to increase 3.8-4.2%. The NRF did caution that they see a potential slowdown from various macro forces. A further test for consumer spending will come after mid-December. At that time, implementation of scheduled tariff increases will occur on a broad base of consumer products, assuming no change to that schedule.

This week’s disappointing ISM surveys gave investors a sharp reminder that trade issues continue to hurt sectors of the economy. The renewal of trade talks next week may provide some guidance to the probability of some relief for those trade issues. Offsetting the ISM survey results, firmer employment numbers suggest the broader economy continues to grow. In our yin-yang economy, growth will likely slow to the economy’s sustainable growth level of 2% or slightly lower. Any future economic decline will more likely come from pressures created in the financial markets than from the real economy. With this investment background, ultimately a shortage of growth will likely lead investors to quality companies that show sustainable growth, low financial leverage, and high rates of returns on equity.