Recently I attended a lunch with several of my colleagues that formerly worked in the Merrill Lynch global research department that I headed. Below, I briefly outline my notes from presentations by two veteran market and economic observers from my former department. Overall, both projected a cautious outlook for the financial markets and economy.

The first commentary comes from Bob Farrell the iconic market analyst. Recently Bob announced that after 60 years he would end his regular writings and close his firm.
Bob started out by reflecting that in the past, fundamental analysts followed companies closely. Their forecasts created the stock price footprints that the chartists followed in their analysis. Today, robo trading creates stock price footprints using a computer while showing little interest in fundamental inputs. His concern comes from the fact passive, robotic, and algorithmic driven decision makers represent the marginal buyer. And key, these marginal buyers drive the direction of stock prices primarily without fundamental inputs.
He then commented that the underperformance of active managers and the move to passive investing effects all aspects of the financial markets. For instance, he noted, the Royal Bank of Canada reported that 70% of its new hires in the financial markets come with engineering not business backgrounds. This shift represents the move from the age of electronic trading to the age of machine learning models. With this change and performance anxiety, costs of management and services increasingly become drivers of investment decisions.
He pointed out that the ratio of market capitalization as a percentage of GDP moved to the high end of its historic range. He cited this as one reason for caution. 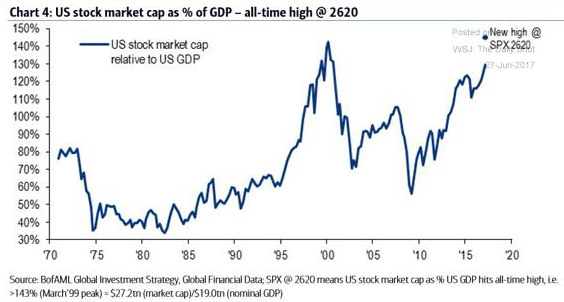 Not surprisingly, in his view, the potential for rising rates means the monetary wind will not be at the market’s back. This becomes more significant with increasing money going to passive and computer directed investments. In contrast, diminishing monies invest based on fundamental research. ETF’s that buy when the money flows in will be forced to sell when the money flows out. Unlike most actively managed portfolios, ETF portfolios do not allocate some portion of their portfolio to cash. Bob’s concern reflects the declining import of fundamental and market analysis needed to balance machine trading. This may prove important at times of heightened market volatility. Bottom-line, he cautioned that what we may be witnessing implies unknowable risk.

The second commentary came from the economist--David Rosenberg. David now works as a partner with the Canadian firm— Gluskin Sheff and Associates. I suspect David moved back to Canada to be closer to his beloved Montreal Canadians. David provided very insightful and spot-on economic research leading up to the 2008 Financial Crisis.
In his opinion, David thought the U.S. economy shows very late cycle characteristics. He said this would be the case no matter who had won the election. He cites past history that suggests when confidence peaks economic softness shows up a year later. He believes we reached that peak. He also showed other recent peaks including vehicle sales, wages, and in his view--inflation. In his opinion, these tops represent late economic cycle indicators. For the equity market, he showed that stock prices relative to reported earnings also show late cycle levels. Finally, he pointed out that 10 out of the 13 times when the fed raised the funds rates recessions followed.

As you can tell from their tone, both show increasing caution. These cautious views reflect, in part, the history of prior market and economic cycles.
My observation would be that the unconventional monetary policies (ZIRP and QE) adopted by the Fed created substantial distortions in both the financial markets and economy. Therefore, such monetary distortions may reduce predictive powers of past market and economic cycles. Time will tell whether the history used by these two observers will be predictive of future outcomes.
Nonetheless, with the Fed increasing interest rates, admittedly from historically low levels and still relatively accommodative monetary policy, investors should avoid the natural complacency that results from the lengthy period of low volatility in both financial markets and the economy.