Fourth-Quarter Real GDP Report — Slightly Better Than Expectations
The fourth-quarter initial estimate of real gross-domestic-product (GDP) increased by 2.6% compared to the prior quarter (see Figure 1) — slightly better than expectations. There are two ways to look at the economy’s annual growth. Many compare fourth-quarter GDP growth with the same quarter in the prior year. In that case, the growth measured 3.1% for 2018 (see Figure 2). Others use a measurement over the full year. That method showed 2018 GDP growth of 2.9%. I will let you guess which of the two numbers each political party will use. 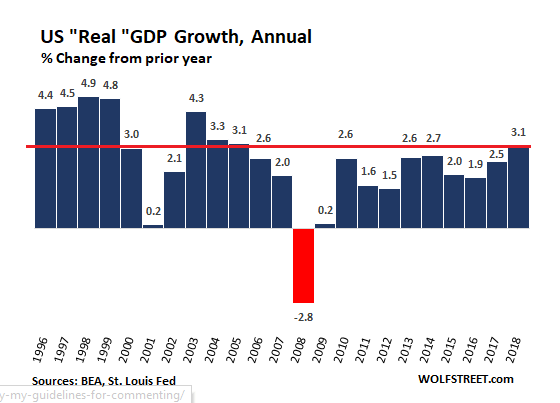 Fourth-Quarter Inventory Build a Plus — Likely to Reverse in the First Quarter, Hurting GDP Growth
Inventories and net trade contributed 0.6% to the fourth-quarter’s 2.6% growth. The benefit from the fourth-quarter inventory build will reverse itself in the current quarter. Most of that inventory build likely reflected accelerated buying to beat the January 1st tariff increases on Chinese imports. As evidence, the inventories-to-sales ratio shows a recent buildup (see Figure 3). Meeting this quarter’s consumption growth, in part, will therefore come from reducing inventories rather than increasing production. As further evidence, the National Retail Federation, in its Global Port Tracker, forecasts a nearly 1% decline in January and February container import volumes followed by a small increase in March. The likelihood of reduced inventories will put downward pressure on first-quarter GDP growth. 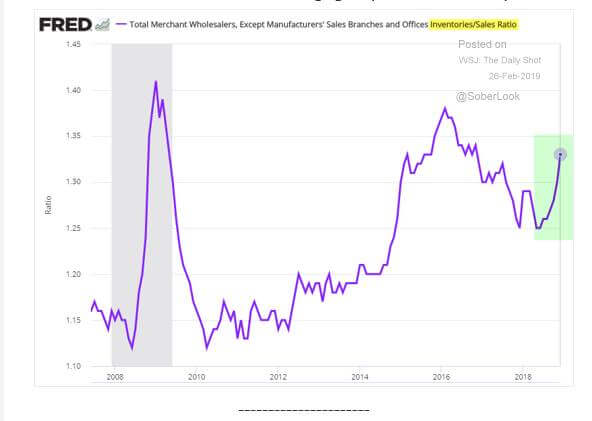 Final Sales Growth of 3.1% - a Good Measure of Real Economic Activity
Final sales to private domestic purchasers represents, in effect, what went across the sales counter. In our view, this gives a better picture of economic activity by stripping out inventory change and government spending. For the quarter, final sales to private domestic purchasers increased 3.1%. Personal consumption expenditures increased a strong 2.8%. Notably, personal consumption expenditures on durable goods increased 5.9% in the quarter. While showing a healthy spending level, consumers also increased their savings rate from 6.4% in the last quarter to 6.7%. The ability to both spend and save reflects the strong labor market (see Figure 4) and the steady increase in average hourly earnings.

Inflation Moving Up Gradually – the Fed Will Wink At Higher Inflation Levels
The core personal consumption expenditure index rose slightly above expectations at a 1.7% annualized rate. Inflation may be bubbling up in some parts of the economy. Recently, a number of staple product manufacturers, such as Proctor & Gamble and Colgate, announced further price increases. Following on their footsteps, Whole Foods announced it would also raise prices on hundreds of products. At the same time, the U.S. output gap closed which can also point to higher inflation (see Figure 5).
With the Fed now considering what could be called a symmetrical approach to inflation, it will likely permit inflation to run above its 2% long-term inflation goal. Therefore, if inflation bubbled up, we would expect the Fed to remain “patient” and not see an urgency to raise the Fed Funds rate. Interestingly, rising rates of inflation tend to occur as the business cycle matures. 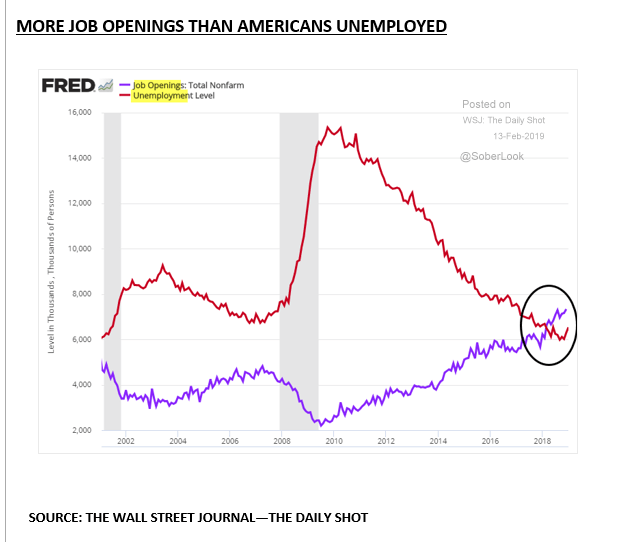 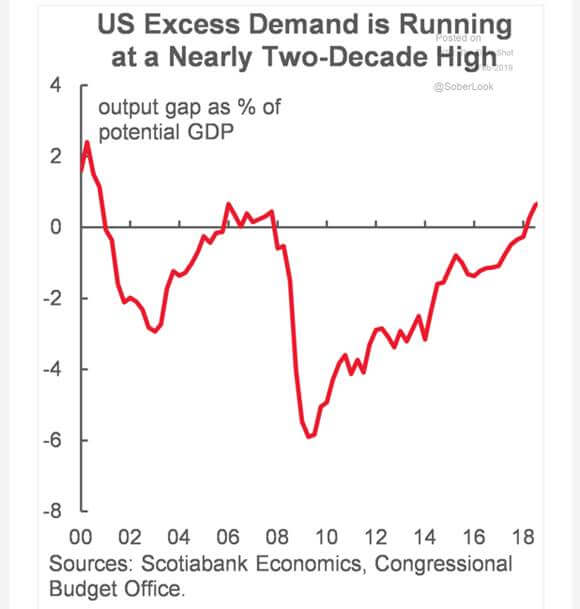 March 2nd Federal Debt Limit Returns — Potentially Lots of Political Noise But Treasury Can Fund Until the Fall
The February 2018 budget act suspended the debt limit (ceiling) through March 1, 2019. On March 2nd, the debt limit will reset to reflect the cumulative $1.5 trillion of borrowing through this period to a total of $21.9 trillion. By March 2nd Congress must act to reinstate a higher Federal debt limit (ceiling) or extend the suspension. Over the last decade, Congress increased the debt limit ten times. At the same time, political gamesmanship, in some instances, delayed the inevitable outcome for a short period. When Congressional debate dragged on for days, market jitters resulted.
While waiting for Congress to increase the debt limit, Treasury can use its cash deposits at the Fed as well as “extraordinary” measures to pay the bills. Contributing to the Treasury’s bank account will be corporate and individual tax payments in mid-April. In 2018, such tax payments totaled over $200 billion in that month. Without additional borrowing, Treasury could pay its bills until sometime in the fall. Also working to Treasury’s advantage, the FY2019 deficit will likely come in $50 billion below original projections.

Investment Conclusions
The equity markets recovered from the sharp decline at the end of the fourth-quarter (see Figure 6). 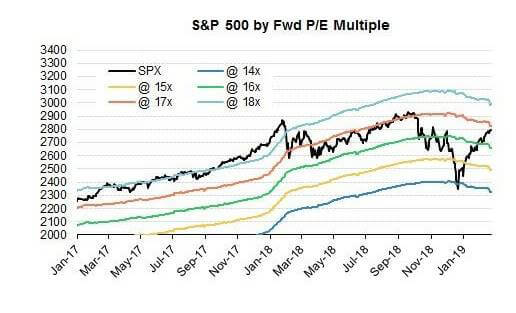 Source: Bloomberg
At the same time, according to Goldman Sachs, earnings forecasts declined sharply, as well, over the past few months. 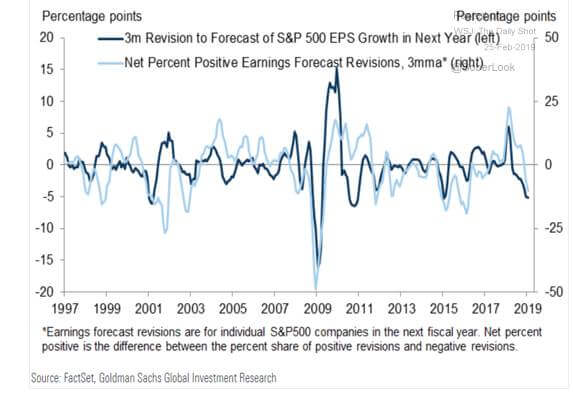 Investors now face first-quarter data uncertainties from the trade war, partial government shutdown as well as the usual seasonal adjustment distortions that occur in this quarter. Economists now look for subdued first-quarter growth numbers towards the low end of 1%. First quarter economic results, more than ever, will provide little guidance for the remainder of 2019. At the same time, the economy shows few excesses and therefore little reason to expect a recession this year. As a result, while still calling for a second half slowdown, many economic forecasts seem somewhat more optimistic. With economic data, as a whole, giving little definitive direction, our investment recommendation suggests a balanced portfolio asset mix of equities, fixed income, and alternatives. In the case of equities, with the likely economic slowing, stocks with sustained growth will attract investors. With the dovish Fed, shorter duration debt securities still make the most sense. Finally, alternatives can play the role in the asset mix that long duration bonds no longer can provide.