Consumers Carrying the Economy and the Fed Funds Rate Outlook 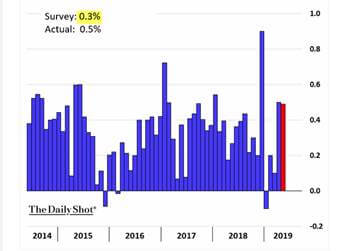 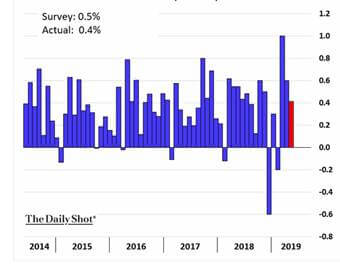 Investors Now Look For a 25bp Rate Cut.
The strong payroll numbers reduced the odds of a 50bp cut by the Federal Open Market Committee (FOMC) to practically zero (see Figure 3.) More economic data before the FOMC meeting at the end of July could change that conclusion.

Figure 3
Odds for a Rate Cut In July 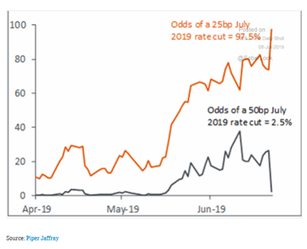 Despite the strength of the payroll numbers, the FOMC seems forced into a 25bp rate cut in July based on the financial markets and the pressure from the White House. For evidence, Figure 4 shows little deviation of FOMC rate decisions from investor prior consensus. Again, that could change, based on various economic data released sometime before the July FOMC meeting or a trade settlement. 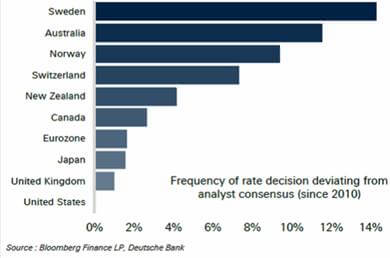 The Trade War and Business Reaction
Capital Investment
Unlike the consumer, various macro reports show signs of business slowing. In our view, the slowing importantly reflects the trade dispute with China. For example, the uncertainty of the trade war outcome leads businesses to pull back on capital spending. If this pullback continues, longer-term business activity will particularly feel this impact.

Inventory Reduction Likely Reflected In Headline Second Quarter GDP
In the second quarter, instead, more end demand will likely come from inventory reduction instead of resulting from production. Lower rates of increased production increases will likely cause headline numbers for second-quarter GDP growth to suffer. Both the Atlanta and New York Feds currently forecast about 1.5% second-quarter GDP growth compared to 3.1% in the first quarter.

Second Quarter End Demand Likely Higher Than Headline GDP Result
Unlike the first quarter, second-quarter final sales to domestic purchasers will likely come in higher —over 2% — than the forecasted headline GDP growth. As has been our long-time view, this measurement gives a better sense of overall economic activity. If this proves correct, then the likelihood of a recession in the second half seems unlikely. The outlook for next year will depend in part on the outcome of the trade dispute.

Investment Conclusions
Financial markets continue to pressure for Fed Fund rate cuts. Until recently, many called for a 50bp cut at the FOMC meeting at the end of July. It seems unlikely the FOMC will resist a call for a 25bp cut at its July meeting. With lower rates, investors will likely seek out higher fixed income returns by taking greater credit risks. At the same time, the trade negotiations ill-defined single point risk leads us to continue to recommend a balanced portfolio of equities, fixed income, and alternatives.